In April 1959, the Farmington school board changed the name of Farmington Junior High 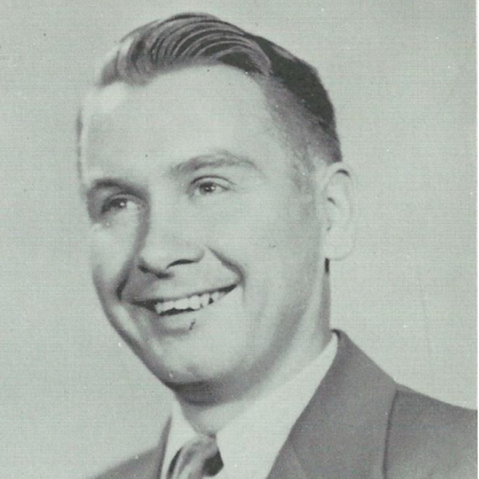 School to Arthur C. Tibbetts Junior High School. Arthur (Art) Tibbetts, Jr. was a native of Wisconsin and graduated from Eau Claire High School in May 1942. America was six months into World War II and three months later Tibbetts enlisted in the Navy. In 1945 he was a radar operator aboard the aircraft carrier USS Bunker Hill. In the spring of 1945, the Bunker Hill was operating in support of the invasion of Okinawa. On the morning of May 11th the carrier was struck by a Japanese kamikaze. As billowing black smoke poured from the flight deck, a second kamikaze bored into the ship. Miraculously the Bunker Hill was saved, but 346 men were killed, 43 were missing, and 264 were wounded. The ship limped back to Pearl Harbor and then to Bremerton, Washington. Like many other soldiers, sailors and Marines, Tibbetts had put life on hold for three years.

On August 5, 1945, he married Roberta (Bobbie) Graham of Toledo, Ohio in Tacoma. After the war Tibbetts attended Eau Claire State Teachers College. He graduated in 1949 with a degree in physical science. After a rough Wisconsin winter in which two of their young boys contracted pneumonia, the Tibbetts family decided to move to New Mexico. They arrived in Farmington in August 1951. Art Tibbetts began teaching physics and chemistry at Farmington High School. Mr. and Mrs. Tibbetts jumped into community activities. Arthur Tibbetts joined the Elks Lodge and the Masonic Lodge. Mr. Tibbetts was a member of the local Toastmasters Club and his wife was a member of the Toastmistress Club.

At the high school, Art Tibbetts was sponsor of the student council and the science club. He was also the public address announcer for Scorpion football games. Tibbetts was on the fast track to an administrator’s position with the public schools. In October 1956, he and the Farmington School Superintendent W.H. Foster were the only two speakers from Farmington at the New Mexico Education Association meeting in Albuquerque. On Saturday, December 8, 1956, high school principal Jack Echols along with Art and Bobbie Tibbetts left Farmington for Albuquerque, where Tibbetts and Echols were scheduled to attend a meeting of the high school coordinating committee. They left early, about 6:00 AM, because driving would be slow. There had been a one inch snow fall on Friday afternoon in Farmington and the Gallup area had received four inches. New Mexico Highway 44, a narrow two lane road, had a reputation as a dangerous road, even in good weather. As they neared Lybrook the highway was covered with ice. Principal Echols was driving when they suddenly came upon a semi-truck owned by Farmington’s Ferguson Trucking. The truck was reportedly parked partially in the southbound lane. Echols had to swerve to avoid the truck and lost control of the car, it turned over and then went down an embankment. It was a time when seat belts were not standard equipment, and virtually all vehicles were rear wheel drive, making them notoriously unresponsive on slick roads. State Police officer Gene Tow said it appeared that all three occupants were thrown from the car. Mrs. Tibbetts was not injured. Jack Echols had a fractured collar bone and broken ribs. Art Tibbetts had fractured his left leg and arm and had internal injuries as well as damage to his spine. At the time there was a Navajo Mission Hospital two miles from Blanco Trading Post and a nurse arrived on scene and stabilized Echols and Tibbetts. They were loaded in the back of a pickup and taken to the hospital near Blanco Trading Post. From there, they were taken to Farmington’s San Juan Hospital (now known of course as San Juan Regional Medical Center). Principal Echols’ recovery was fairly rapid, but Art Tibbetts’ injuries were more severe. On the morning of December 12th, his condition worsened and that afternoon, Mr. Tibbetts passed away.

Besides his widow, he left behind three young sons and his father Arthur Tibbetts, Sr., who was a car salesman for Farmington’s Perry Smoak Chevrolet. Arthur Tibbetts’ funeral was held on the following Saturday at the Farmington High School auditorium on Apache Street. Tibbetts witnessed only the beginning of the tremendous changes that would soon occur in Farmington’s school system. The years of 1955 to 1959 witnessed a frenzy of construction. The new Farmington High School in Sunset Heights was built during this period as well as the city’s second junior high (Hermosa). Until those facilities came on line, the overcrowding was tremendous. From the fall of 1955 until the spring of 1958 some junior high students attended classes at the WPA building at Swinburne Elementary, while others attended classes at the Sunset Heights facility, which was referred to as Sunset Junior High. Finally, in the fall of 1958, all of Farmington’s high school students began attending the Sunset Heights facility and the old high school at 312 E. Apache Street became a junior high. Farmington’s only junior high had naturally been known as Farmington Jr. High and their sports teams were the Junior Scorpions. With Hermosa nearing completion, a new name was needed for “Farmington Junior High.” It was not until April 1959 that the school board took that opportunity to honor Arthur Tibbetts. Mr. Tibbetts is buried in Farmington’s Memory Gardens Cemetery.

Written by Mike Maddox. Photo of Arthur Tibbetts from the 1957 Naniskad.

Note: When the 1959 school year began all junior high students in Farmington attended Tibbetts Jr. High. Those in the Tibbetts district attended classes in the morning and Hermosa students attended in the afternoon. Sports teams at Tibbetts were known as the Junior Scorpions until the start of the 1962/63 school year, when the name was changed to Titans.

Tibbetts Jr. High continued as a junior high until the 2000-2001 school year when all of Farmington junior highs turned into middle schools. Tibbetts Middle School was still located at 312 E. Apache at that time. 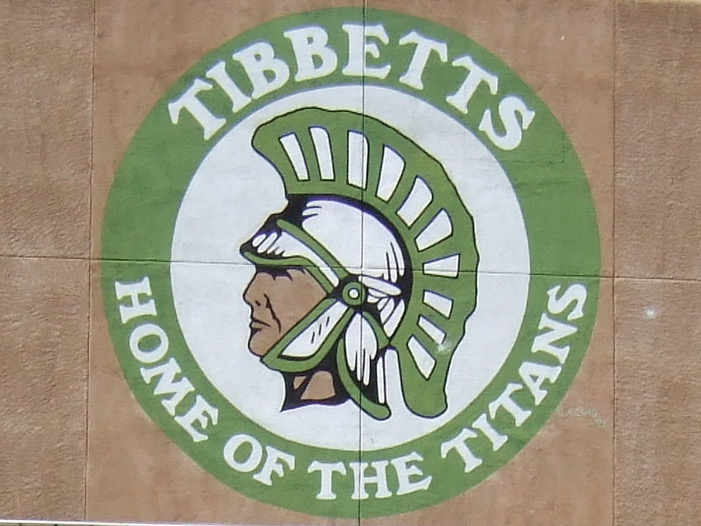 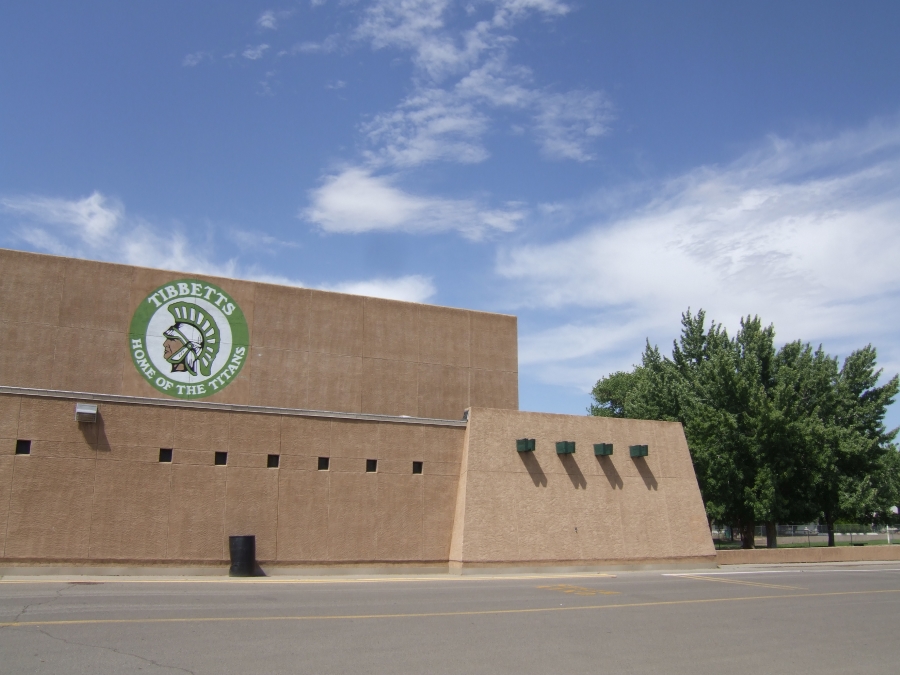 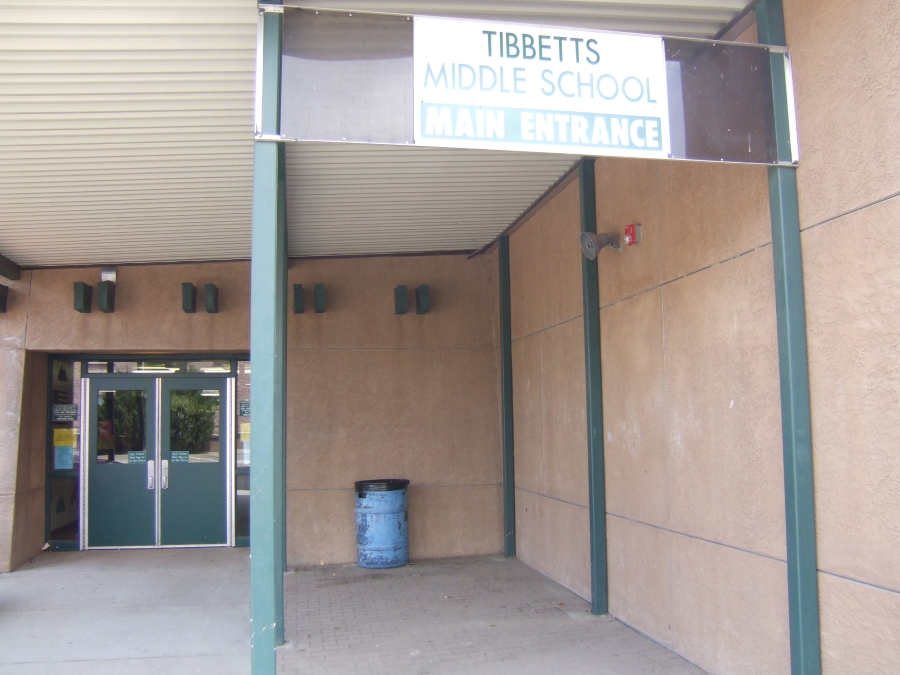 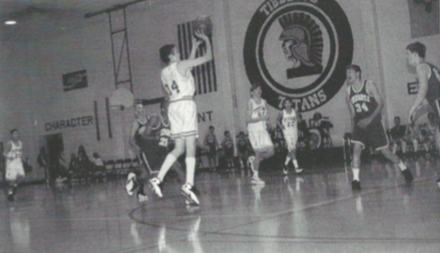 Being the oldest school in Farmington in 2010, Tibbetts Middle School finally moved to the top of the remodel list. FBT Architects and Jaynes Corporation supervised the design and construction of the new building. 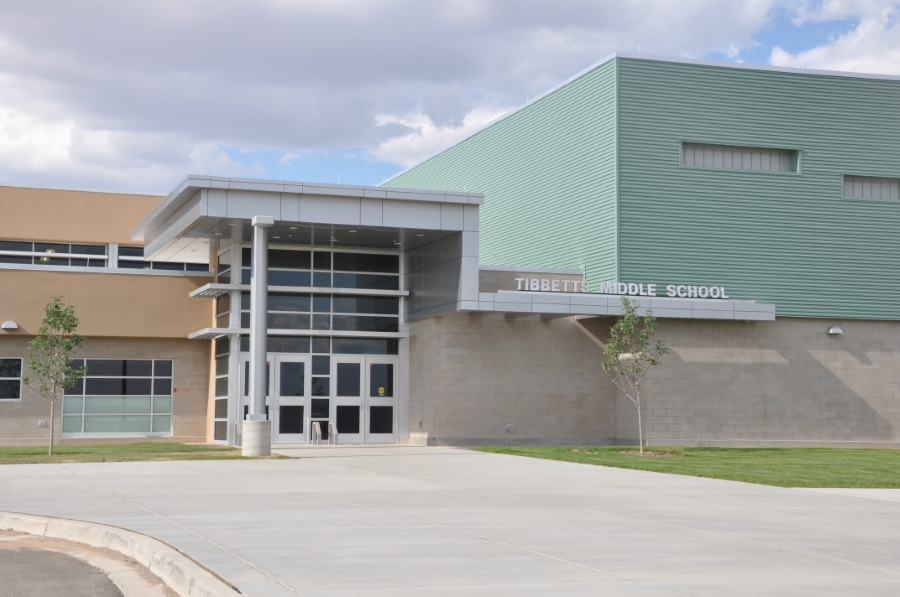 We are very happy with our new school building! GO TITANS!!